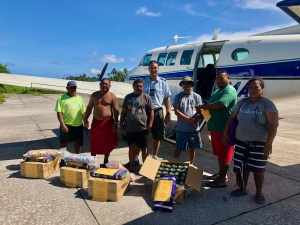 Since 1951, the US military on Guam has gathered supplies and gifts for islanders in the remotest portions of the Western Pacific, dropping them from cargo aircraft in an annual Christmas Drop. Over the years the operation has expanded into a joint military-civilian effort, and included forces from other US-allied nations. It even inspired a romantic comedy film, released by Netflix in 2020.

But the 69th annual Operation Christmas Drop, in December of 2020, came at a time that fears about COVID were high. While the Federated States of Micronesia (FSM) had no cases, many had been confirmed on Guam, the US Territory north of Micronesia from where the Drop operates.

“We are cancelling Operation Christmas Drop this year not due to a lack of trust and confidence, but due to ongoing concerns from our citizens in our most remote and vulnerable communities about the COVID-19 Pandemic,” said the nation’s president, David Panuelo, a news release.

Hoping to carry this great tradition on -at least in as small way- Habele quickly developed a plan with long time partner Pacific Missionary Airlines (PMA) for a more modest “Micro Drop” in Yap’s Outer Islands. 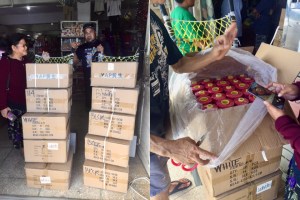 Habele’s Modesta Yangmog left the effort on the ground in Yap, purchasing supplies. She quickly secured crates of thread for weaving, bolts of cloth for thus and sarongs, as well as fishing line and lures. PMA pilot Amos Collins and his team helped divide, sort and pack the gifts. Then, Amos headed out to tiny airstrips on the Atolls of Ulithi and Woleai and the Island of Fais.

Islanders, whose schools have been supported by Habele book, tool and technology donations since 2006, took the gifts to community meeting houses and divided them amongst the villages.

“As a former Peace Corps Volunteer who taught on Ulithi, I still have a t-shirt that came out the back of a C-130 in December of 2003,” explained Neil Mellen, founder of Habele. “We were crushed when we heard there would be no drop this year in the FSM. We had to do something. I am so grateful to Modesta, Faustino, Amos, Grace and all those who helped throw this together on short notice and a shoe string budget.”