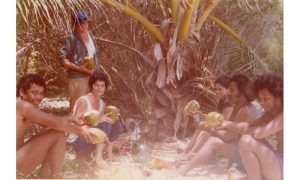 Leona Peterson was native of Waterloo, Iowa. She led the Department of Aging in the Trust Territory of the Pacific Islands during the late 1970s and early 80s.

After the Second World War, the newly liberated islands of Micronesia, Palau, the Marshalls, and the Marianas became a United States administered United Nations strategic trusteeship. This was called the Trust Territory of the Pacific Islands, or “TTPI.” Initially under Navy control, the islands were transferred to the U.S. Department of the Interior in 1951. Administrative headquarters, originally in Honolulu, moved to Guam, and finally to Saipan. In the 1980s, the region transitioned to political independence, with the establishment of the Federated States of Micronesia, Republic of Palau, and the Republic of the Marshall Islands.

Mrs. Peterson graduated from Waterloo West High School in 1944, and completed her nursing degree at the University of Iowa in 1948. She worked as a nurse in Abilene, Texas, then Macon, Ga. Upon returning to Des Moines she was a nurse and nursing instructor at Methodist Hospital. After receiving her masters of social work from Drake University in 1972, she was appointed to head the Iowa Department on Aging. She went on to run the Department on Aging for the Trust Territories of the Pacific, starting in 1976.

Under Leona Peterson’s five years of leadership, the Department of Aging operated within the Community Development Division of Government of the Trust Territory, serving all of the present-day Marianas, Micronesia, Palau and the Marshall Islands.

The Leona Peterson Memorial Scholarship provides tuition assistance to a young woman in either elementary or high school high school attending an independent school in either Yap or Pohnpei.