Three students from Yap represented the Federated States of Micronesia at an international robotics competition in Washington DC this summer. One of nearly two hundred national and regional teams competing, the Micronesian students bested seasoned squads from developed nations including the United States and France.

Now there is talk of expanding the modest “Yap Robo League,” allowing more island students the opportunity to engage in robotics through high school based clubs and classes in the remote Western Pacific. 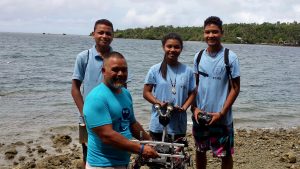 A series of meetings was held in Yap this September, bringing together traditional leaders, public servants, school leaders, as well as parents and communities members to discuss the possible expansion.

The US based nonprofit “Habele” first established the Robo League in 2012, providing materials, instruction, and US partner schools to Yap Catholic High School and the Yap SDA School.

Thanks to a grant from the Office of Insular Affairs, a long-standing proposal to expand the League may now become a reality. The September meetings in Yap brought together families, educators, and community members to develop the details and chart a course that ensures ownership and sustainability.

“This is hands on learning. Robots bring together science, technology, engineering, and math (STEM) skills, making it practical and exciting for students.” explained Teresa Filepin, Director of Yap’s State Department of Education. “Including both public and private schools, as well the US partner schools, also sets up opportunities for partnerships beyond the robots.”

“The Office of Insular Affairs is pleased to provide a grant towards this pilot Science, Technology, Engineering and Math learning project for schools on Yap and neighboring islands in the Federated States of Micronesia,” said The Honorable Doug Domenech, the recently confirmed Assistant Secretary of the Department of the Interior for Insular Areas.

“The Habele Robo League program not only promotes development of critical 21st century skills for Micronesian youth but also embodies the best aspects of the U.S.-FSM relationship, a partnership and collaboration with a shared history and common goals for the success of both their people.”

As robotics parts kits make their way to Yap and schools staff began technical training in late September, a year-end statewide robotics championship was tentatively scheduled for mid-May of 2018.