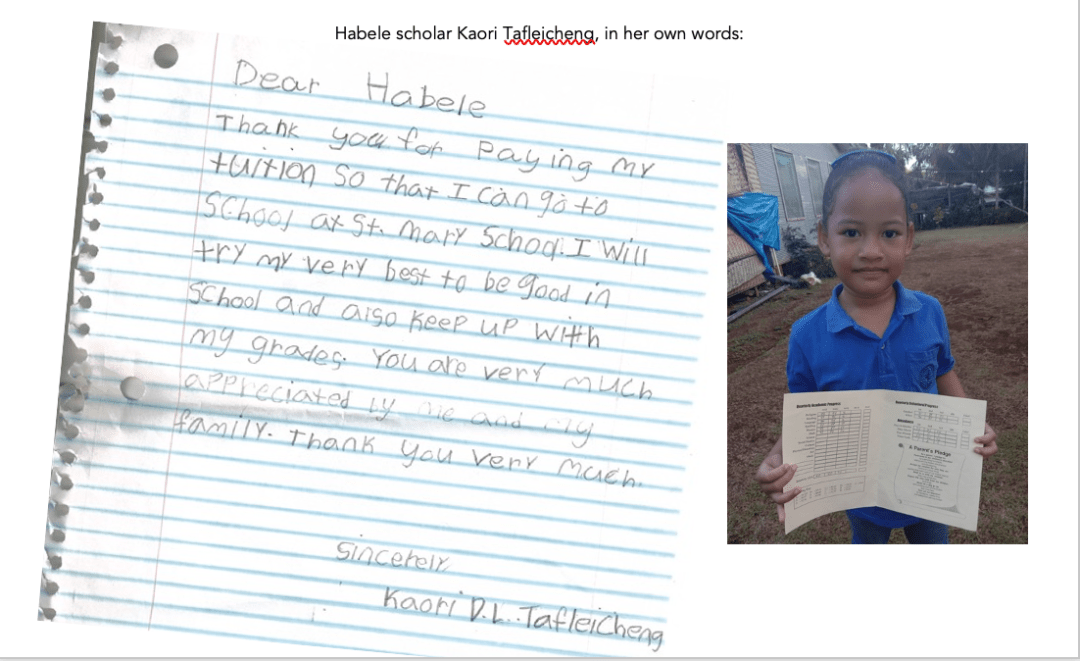 The K12 tuition scholarships are provided by Habele, a US nonprofit serving students and schools across the Federated States of Micronesia (FSM). Established by former Peace Corps Volunteers who lived and taught in the Islands, Habele has been granting tuition assistance to Micronesian students since 2006.

“These investments in individual students highlight the deep personal connections between the United States and our allies in the Freely Associated States,” observed US Congresswoman Aumua Amata Coleman Radewagen of American Samoa. “Though our governments are united by formal alliances and treaties, it is the personal ties of our peoples, over decades of shared history, that make the relationships truly vibrant. My family lived in Micronesia for almost 17 years, both on Majuro and Saipan and I also lived on Guam while attending the University of Guam, while I have nieces and nephews with Marshallese and Chamorro heritage through marriages of my brothers. As a former Peace Corps employee in the Pacific, “I’m also pleased to see the scholarships were established by former Peace Corps volunteers”

The Compact of Free Association (COFA) allows Micronesian students to come to the United States for college, where they are eligible for generous federal grants that pay for their higher education. However, many young people in Micronesia -particularly from lower income families- aren’t able to take advantage of these opportunities because, they don’t complete high school prepared to succeed in American higher education. Habele’s K12 tuition scholarships help place such students at high achieving, independent schools, and on a path towards ultimately obtaining a college degree.

Habele Scholars come from villages across the hundreds of islands and atolls that comprise the Federated States of Micronesia. Students from Yap, Chuuk, and Pohnpei, as well as their lagoon and outer islands, will be attending eleven different schools in 2022-23, including Xavier High School, Saint Mary’s, Faith Christian Academy, and SDA Schools in Yap, Chuuk and Pohnpei.

The K12 scholarships are entirely funded by donations from individual Americans who support Habele. Most are themselves former Peace Corps Volunteers, civil servants, tourists or contractors who spent time in Micronesia.

This is the seventeenth year Habele has awarded merit and needs-based scholarships, which average between 50 and 75 percent of the total tuition families owe. The nongovernmental organization also provides book donations, support for traditional skills mentorships, and organizes high school-based robotics clubs. Habele remains the only US nonprofit exclusively focused on serving students and schools within the Federated States.

Among the 54 scholarships awarded are several Memorial Scholarships. These honor the legacy of specific individuals whose life or work “embodied the best of the longstanding US-Micronesian partnership.” Introduced this year, the Martin Yinug Memorial Scholarship, honors the late Chief Justice of the Micronesian Supreme Court, and his outspoken commitment to public service, rule of law and judiciary independence. Another, the Marshall Wees Memorial Scholarship, honors a US Navy doctor who battled an outbreak of yaws that was ravaging the native population of Federai Island during the War in the Pacific.

“Being one of the Habele Scholarship recipients for the past two years is a tremendous honor and a joy,” said Sheridan Giltamag. A rising junior at Our Lady of Mercy Catholic High School, Miss Giltamag earned a 3.9 grade point average over the course of last school year. She and her family have also been involved in WeavingConnections, a Habele program to support mentor-based preservation of traditional weaving skills.

“The scholarship indeed helps my parents with tuition obligations at OLMCHS in Pohnpei. In addition to the financial support, Habele Scholarship has motivated and helped me in many ways, which include keeping up with my grades, spending more time with my school work, and the importance of education and my future.”