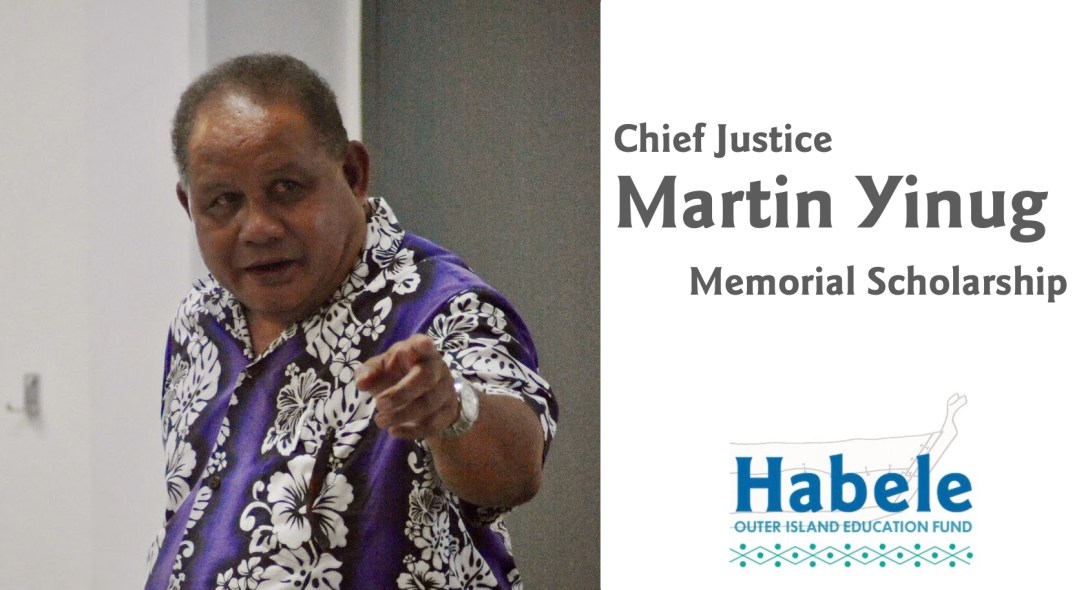 Habele, a US nonprofit established by former US Peace Corps Volunteer who served in Micronesia, has established a new tuition scholarship honoring the late FSM Supreme Court Justice Martin G. Yinug of Yap.

Since 2016, Habele’s K12 tuition scholarships have helped students across the FSM attend independent elementary and high schools by offsetting a large portion of the out-of-pocket fees and tuition needed to enroll. Several of the Habele scholarships are named to honor the legacy of specific individuals who either embodied the US-FSM partnership, and or played a significant and positive role in the development of the Federated States.

The newly announced Martin Yinug Memorial Scholarship aims to celebrate and perpetuate the legacy of the late Chief Justice of the Supreme Court of the Federated States of Micronesia, the Honorable Martin G. Yinug.

Chief Justice Yinug was born on October 18, 1949 in Guror Village, Gilman Municipality on the Island of Yap. He earned his Bachelor’s Degree in Political Science at the San Francisco State University in 1972 and his Juris Doctor in 1980 from the Catholic University of America Law School.

In 1992 Martin Yinug was appointed and confirmed to lead the FSM Supreme Court as it’s Chief Justice, a role which he held until his death on August 31, 2014. In September of 2013, Chief Justice Yinug had been elected by the members of the Pacific Judicial Council (PJC) to serve as the President of this regional judicial organization.

Justice Yinug was widely praised for his selfless commitment to the public good. FSM Vice President Alik L. Alik described him as “a humble man of high principles, of few but eloquent words, and of impeccable integrity and high morality.” Vice Speaker of the Micronesian Congress, Paliknoa K. Welly, pointed to Yinug as “an excellent role model—a high achiever with a colorful career history and education who showed many that ‘it can be done.'” Beauleen Carl-Worswick, Associate Justice of the Supreme Court of the Federated States of Micronesia, observed that Martin Yinug was “a dedicated public servant and leader who championed the Rule of Law.”

The Martin Yinug Memorial Scholarship was made possible through the support of Roger Gale, an American with a long personal commitment to the People of Micronesia, and a former professor of Yinug’s.

Yapese students attending or enrolling at an independent high school on Yap are encouraged to apply for the Yinug Memorial Scholarship. The scholarships award provides approximately seventy-five percent of the student’s tuition each school year.

Any Micronesian student looking for financial assistance to attend a private elementary or high school within the FSM is encouraged to visit habele.org/scholarships to learn more about the nonprofit’s scholarship offerings.