An innovative Charter school is reintroducing old cultural skills to local students on Weno, capital of the most populous state in the Federated States of Micronesia.

A distinctive form of backstrap loom weaving was once ubiquitous across the Caroline Islands, today’s Federated States of Micronesia. Now the intricate work of crafting these textiles endures only in the small outer islands strung distantly between Chuuk and Yap. The Akoyikoyi School is looking to change that, hoping to bring loom weaving back to Chuuk Lagoon.

The effort was made possible in part by the donation of a handcrafted warp board, backstrap looms, peripheral weaving tools, and thread from Habele. Funding was generously provided by the Matson Foundation of Hawaii.

Akoyikoyi is a tuition-free charter school accredited by the Chuuk State Department of Education. Community involvement is an important component of Akoyikoyi school so parents are required to attend PTA meetings to stay informed and involved in their childrens’ education. The school combines both Chuukese and English native speaking staff who are needed for proper bilingual instruction and cross-cultural awareness.

Habele is a nonprofit, established by former Peace Corps Volunteers, that works across Micronesia to serve students and schools. Habele’s support of cultural skills developed in Yap from its sponsorship of after school mentorship programs using traditional techniques, such as carving and weaving, to imbue students with a sense of accomplishment and community participation. 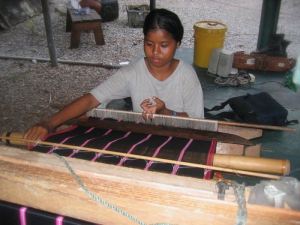 Aware of Habele’s WeavingConnections program, which supports Outer Island weavers who have migrated to the United States, Akoyikoyi asked Habele for a loom of the sort still used in the Western Caroline Islands.

“This school year we started a traditional skills class,” explained Clark Graham, of Akoyikoyi. “The students are learning to weave coconut fronds for roofing. Plans call for them to learn how to weave other things, including coconut baskets to carry food and also the round basket used to carry breadfruit. 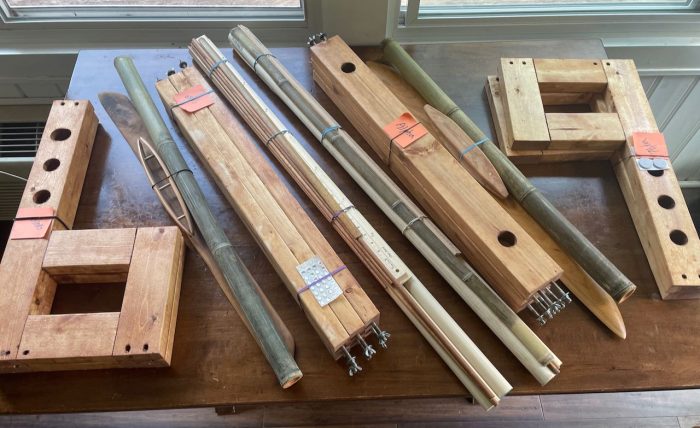 Portions of looms and tools designed by Outer Islanders of Yap, fabricated by Habele and sent to Akoyikoyi School in Chuuk.

He explained that having “a tyr (Chuukese for ‘loom’) would be another step in the learning process allowing participating students to get more in touch with their traditional arts.”

A personal connection adds further significance to the project. Graham’s son Curt’s “paternal great grandmother was the last woman in Penia to use a tyr. “When she died, the loom was placed in her grave,” recounts Graham “That marked the end of such weaving. “

Penia is a village on the northeast shore of Weno. This timeline of weaving’s decline in the Chuuk Lagoon appears consistent with published reports. In his widely cited “Material Culture of Truk,” American Anthropologist Frank M. Lebar observed that by his 1947 fieldwork “weaving had all but disappeared on Truk.” LeBar identified only eight older women among his interviewees on Romonum, a lagoon island, who “knew some or all of the processes of weaving.”

“Its great to be a small part of this,” explained Habele Founder Neil Mellen, himself a former Peace Corps Volunteer who taught in the Outer Islands of Yap. “The credit goes to the educators at Akoyikoyi, the weavers from Yap’s Outer Islands who worked with Habele to document the weaving equipment, and the Matson Foundation who had the generosity to pay for the raw materials and shipping.”