Each year, former Peace Corps Volunteers and other Americans with a personal connection Micronesia donate to help Habele award tuition scholarships to ambitious students in the Federated States of Micronesia (FSM).

Since 2006, Habele’s K12 scholarships have ensured that bright, hardworking students have access to the best education possible. Based on need and merit, these scholarships largely serve remote outer island, rural village, and female students though all students across Yap, Chuuk, Pohnpei and Kosrae may apply.

A handful of independent schools scattered across Micronesia have consistently demonstrated graduation rates, test scores, and college entrance rates far beyond those in the government schools. Situated in the district capitals of Micronesia, these faith-based, nonprofit schools depend on modest tuition fees to operate.

Even with discounts, many of the lowest income Micronesian families cannot afford the modest costs of school such as Xaiver High School, Yap SDA School, Faith Christian Academy, or Our Lady of Mercy. Habele scholarships, which range on a cases-by-case basis from 50 to 75 percent of tuition owed, extend access to the most financially challenged students.

Twenty-six students were awarded scholarships for the 2021-22 school year, attending eight different elementary and high schools across three of the Micronesian states. The average scholarship for the year was $615.00.

Families and scholars commit to provide report cards over the course of the year, and those first quarter grades are now coming into Habele. 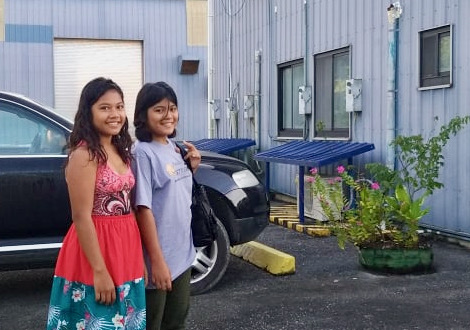 Case-in-point are LJ and Tyrah, a pair of cousins from the very sparsely populated Island of Asor on the Atoll of Ulithi. Ulithi, famous for its role as a secretive naval base and staging area during the War in the Pacific, is one of the Outer Islands of Yap State.The two young women are attending Yap International Christian (YIC) for intermediate school. For both it is the first time living and going to school beyond the shores of their tiny island home.

Despite the challenges of adjustment -Yap Proper has a population near 5,000, or nearly a hundred times that of Asor- both are doing well, and each earned a place on the YIC honor roll for the first quarter.

“We are just so proud of them,” explained Modesta Yangmog, the girls sponsor on Yap, who also leads the Asor Womens Association (AWA). “We took them out for dinner last night in reward and recognizing their achievements. I’m proud of their hard work, and they know it’s a long hard road ahead, but it helps so much knowing they can focus on their studies, and we can focus on supporting that, knowing Habele can help with the tuition.”

Habele’s founder, a former Peace Corps Volunteer who taught in the public schools of the Outer Islands of Yap, echoed Yangmog’s praise for the students. “The modest financial investments Habele’s donors and volunteers are making through K12 tuition scholarship are just that: modest. They pale in comparison to tremendous investment these students are making in themselves, their futures, and the long-term success and vibrancy of their islands,” explained Neil Mellen, of Habele. “Helping place these and other hardworking students and ambitious future leaders into the best possible classroom is the easy part.”