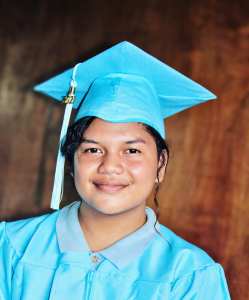 Habele, a US nonprofit established by former Peace Corps Volunteers, has awarded merit and needs-based tuition scholarships since 2006. It is the only US nonprofit exclusively focused on serving students and schools within the Federated States.

Thirty-seven complete, on-time applications from across Micronesia were received ahead of the June 30th annual submission deadline. Based on the money raised from individual donors Habele was able to award twenty-five tuition scholarships to students attending eight different elementary and high schools in three FSM states.

Checks for the scholarships have been mailed to the schools, and families will be also be notified by mail.

“We are tremendously proud of the scholarship recipients, and take great satisfaction to report that scholars’ grades in 2020-21 were some of the highest since we started the program in 2006,” explained Habele founder Neil Mellen. “There were also four 2020-21 scholars who completed their secondary studies this spring. Those students were Cassandra Hagiltaw at Pohnpei Catholic, Crystal Ruerngun Loochaz and Shereeca Pairui at Yap SDA, and Maselyann “MC” Suemog Yangr at Yap Catholic High School.”

In the spring, Maselyann, a Habele scholar since 2016, wrote to Habele about the importance of the program. “I am grateful for your help in achieving my goals. You have helped me to stay in school, and now I am only two months away from graduating high school. I am very thankful to have gotten the chance to make it this far with a great education and a school community that has become my second family and home.”

Maselyann graduated YCHS with nearly all “A’s” on her final report card and is now headed to the University of Guam, where she will pursue a degree in chemistry.

Among the twenty-five scholarships awarded are three Memorial Scholarships. These are a special type of Habele K12 tuition grant. They honor the legacy of Americans whose life or work demonstrated exceptional commitment to the people of Micronesia, and embodied the best of the longstanding US-Micronesian partnership. These include the Lee Huddleston, Dr. Marshall Wees, and Leona Peterson Memorial Scholarships.

“I saw first-hand the amazing results of Habele’s efforts throughout Micronesia, reaching students at the grassroots level, even on the most remote of the outer islands,” observed Ambassador Robert A. Riley, formerly the US Ambassador to Micronesia and now a Director at the East-West Center, a think tank in Hawaii. “Habele fulfills a unique and critical role in FSM’s development.”

“The name “HABELE” is a wish come true for our children,” explained Lazarus Ulith in a note sent in with a student’s report card last month. He observed the nonprofit’s name is itself a play on words meaning both the future tense of “to be” and more figuratively “to achieve an ambition.” “You make it a reality which is why you make a difference in their future” said Ulith.

Those interested in learning more can apply, or support the program online at http://www.habele.org
###